I’ve written about Augmented Reality extensively in the past, but since the days of immersing myself in the purely theoretical potential for the medium, a few key players have rooted themselves in a very commercial reality that is now powering the fledgling industry.

And while B2B-focused vendors such as ViewAR remain behind the scenes, the likes of Aurasma and Blippar have soared in notoriety thanks to some quite excellent packaging and an impressive sales proposition. They are the standard bearers, at least in the eyes of the public.

I like Aurasma. But I also like Blippar. So which is better? Well, let’s find out… Here are some provocations I’ve been toying around with. See if it helps you decide, and let me know which side you fall on in the comments.

[twocol_one][dropcap]A[/dropcap]urasma has more technological power behind it. They have (supposedly) incorporated academic research into their proprietary tech and have a heritage in pattern recognition systems – remember their core business though: integrating with business critical processes and then slowly ramping up prices. They do this across all other Autonomy products! Also consider they are an HP property, whose business is hardware, not software. I believe Aurasma are only using this period of their lifespan to learn what does and doesn’t work, get better at it, gain status, equip users to enjoy AR, and then develop a mobile chipset (literally, hardware optimised for AR) that can be embedded in mobile devices, making HP buckets of royalties. They are chasing install base, but not because they want advertising bucks: they want to whitelabel their tech (i.e. Tesco, Heat & GQ) and then disappear into the background.[/twocol_one]

[twocol_one_last][dropcap]B[/dropcap]lippar have a proprietary AR engine, but are listed as using Qualcomm’s Vuforia engine – which is free to use. They seem focused on innovations in the augmented layer. Reading their interviews, they speak of AR not as a tech, platform or medium, but as a kind of magic campaign juice: stuff that reveals they are extremely focused on delivering a good consumer experience paid for by advertisers, with them as connective tissue. To this end, they too are chasing install base, but ultimately they have a different goal in mind. Being Qualcomm-backed, their future is in flexing their creative muscles and helping make AR a mass market medium through normalising behaviour. Big rivals: Aurasma in the short term, but I imagine that one day, Aurasma will revert back to being a tech platform, and companies like Blippar will provide the surface experience: where good content, not tech, will be what sells.[/twocol_one_last] 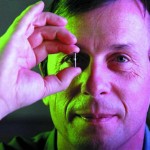