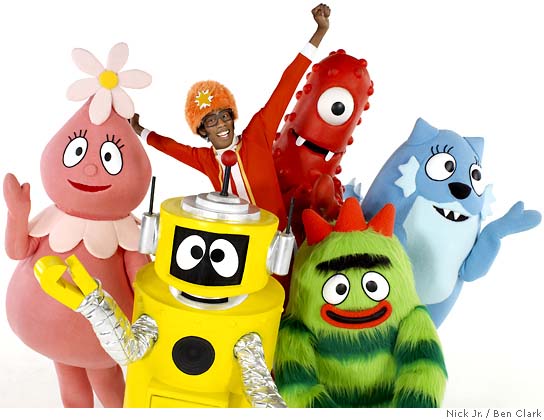 A new gum brand is about to hit the shelves. 5 Gum is designed to ‘stimulate the senses’ and it’s one of the most exciting new brands of the year.
I was lucky enough to get hold of a sample set: 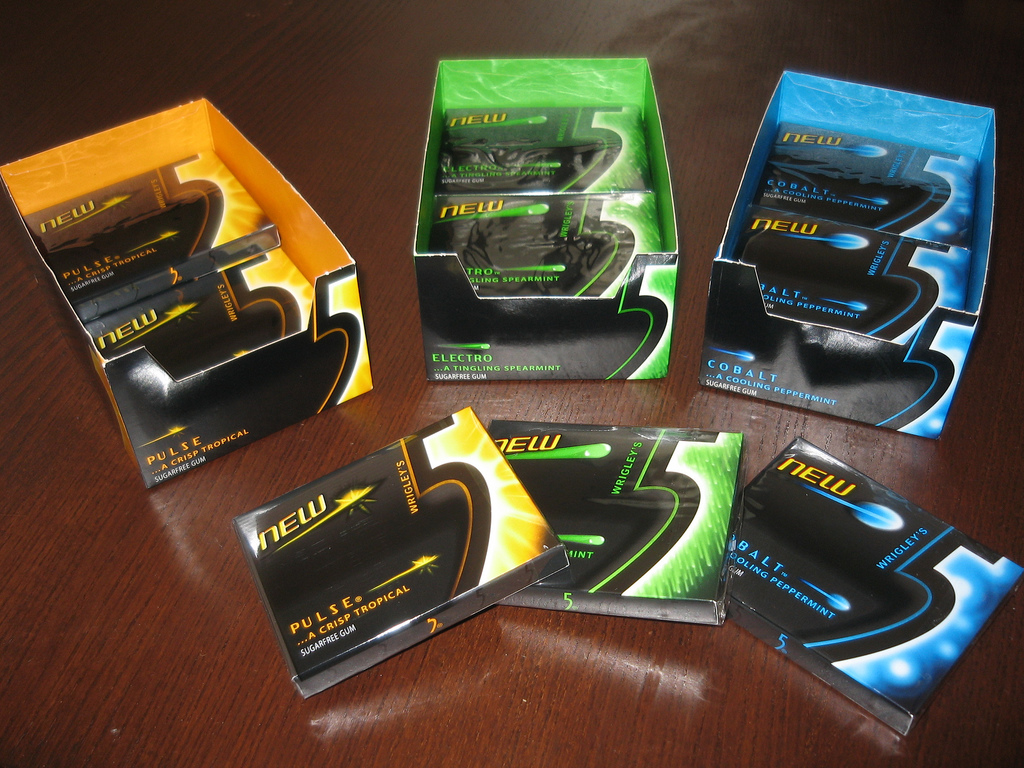 The marketing lifecycle is about to kick off here in the UK with a heavyweight branding campaign designed to encourage product sampling. Let’s look at how the product was launched in the US, taken from the Wrigley corporate site:

Do check out the 5 Gum YouTube channel for examples of the TV/Cinema creative, but in this post I’d like to review the packaging, which I believe is a point of difference that will give the product luxury status.

So to begin with, we’re starting with an initial three flavours: Cobalt – a cooling peppermint; Electro – a tingling spearmint and Pulse – a crisp tropical. Packs will reportedly go on sale at £1.50 RRP, to reflect that they are a considered rather than impulse purchase.

I’ll be looking at Pulse – the tropical flavour, which comes with little speckles of sharp citric stuff that actually gets your mouth watering when you first start chewing: 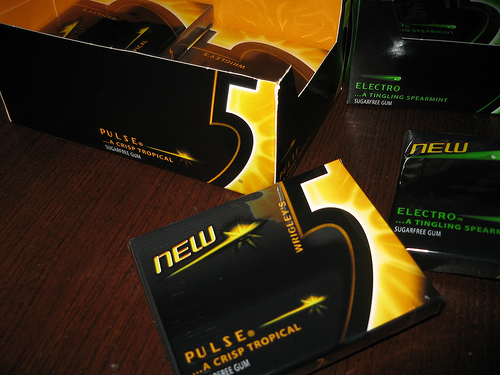 Notice how slick the box looks. Think about the colour of the last pack of gum you bought, and now say that 5 doesn’t look cool on this front alone. It does not look clinical like most gums do with their greens, whites and light blues. They look more like smart trading cards or a packet of condoms for that matter – gum for grownups. 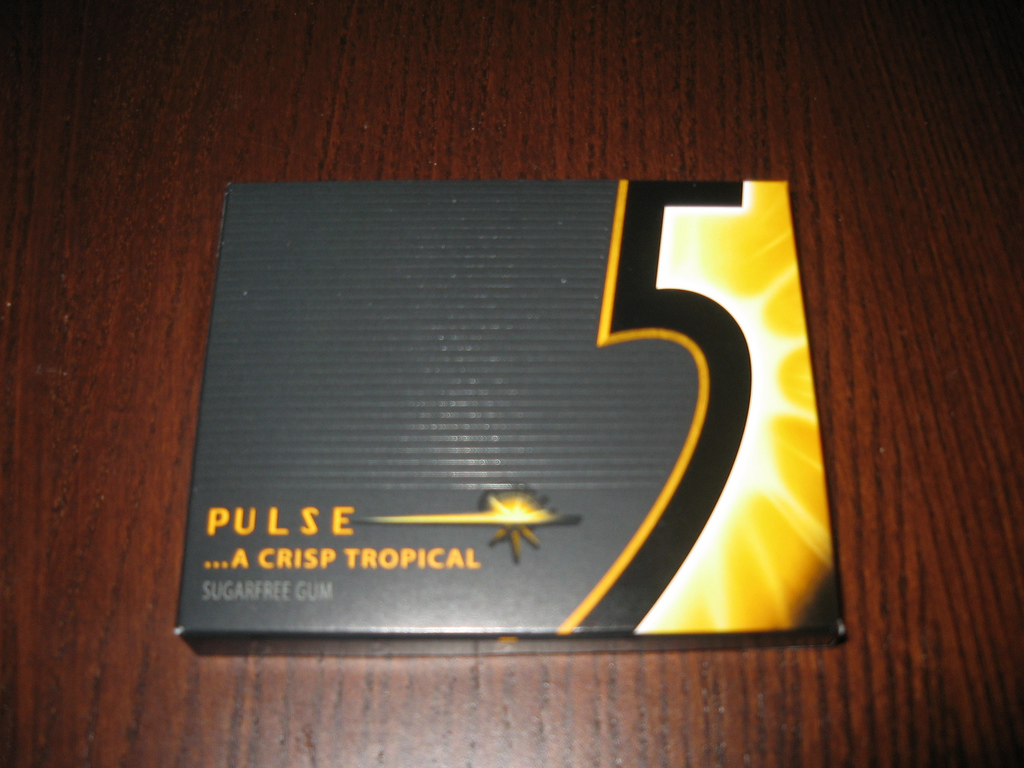 It might be hard to tell from the above but the packs are slightly textured, with a heavy feel in the hand like holding a deck of cards. They slide into a back pocket pretty well. Build quality is excellent, made from a thick card and high gloss colour. 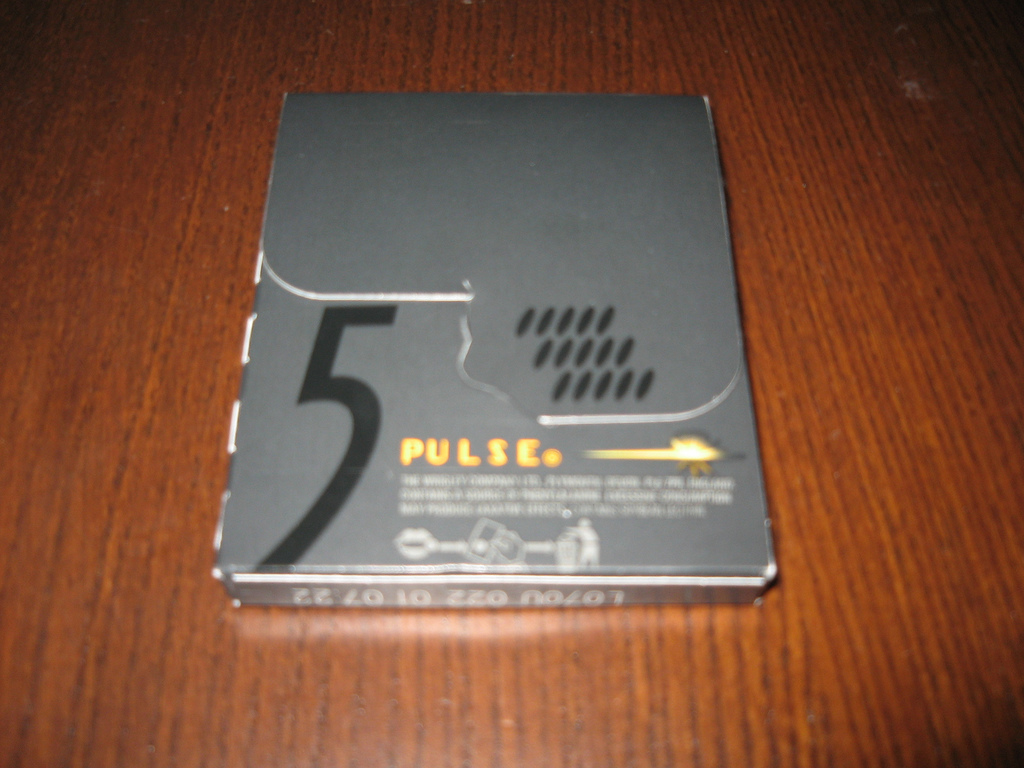 OK I admit the above is a shit picture, but it’s just to give you an idea of how you open and close the box. That flap of paper is embossed with glossy material so you can easily slide the box open with your thumb. Very James Bond. A bit like a book of matches, it’s an old school but perma-cool ‘paper technology’. 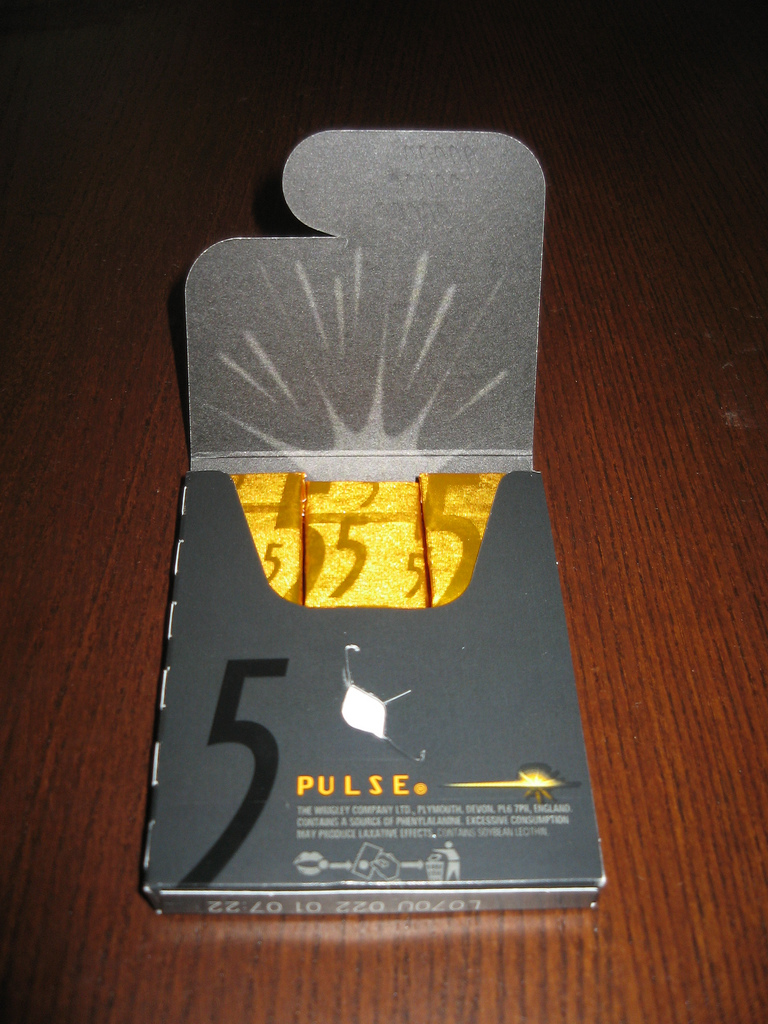 And there’s the money shot. You would not be ashamed offering someone a piece of this stuff, rather than one of those pocket-lint covered chiclets you have to fight the foil to thumb out. The designs on the inside are different for each flavour. This would be a great place to feature a QR code or even exhibit work from young artists.

And that concludes my short assessment of 5 Gum’s packaging. Look out for the TV, Online and Print creative coming soon. If you can’t wait, 5 have teamed up with Vice Magazine to generate early interest and reach into the difficult to please Hoxtonite crew – more info at Viceland whose readers have been asked to work with band Hot Chip to create a Launch Event in London that will stimulate the senses.

If you would like more of these sorts of reviews from me, please leave a comment. I look forward to hearing your feedback. Happy chewing. 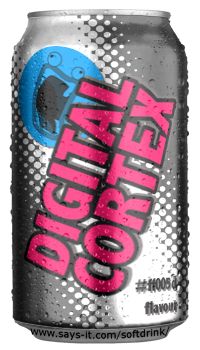 Check it out, I just made a Digital Cortex drink at says-it on their new image generator.
It’s a six step process to make one of these, and there’s hundreds of fonts/styles/options to play with along the way:

This might be really useful when pitching to FMCG brands, or any other brand who might fancy a line in soft drinks. Zero creative costs.

Imagine : the T-Mobile Magentaberry Lite, or the IKEA Swedish Rutabaga Cola.
Well, I think it’s a good idea – you can even send off for fridge magnets as leave-behinds.

Try it for yourself here.

Our new advergame for T-Mobile, developed by Kempt Media and seeded by Killer Viral.

The brief was to deliver on the theme “Double Your Credit” to launch T-Mobile’s new product, which lets you top up £10 in the week, and recieve £10 free credit at the weekend.

I’m posting this here to to help the ‘viral’ process, so grab an embed url and get stuck in! 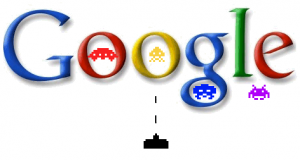