Augmented Reality (AR) is a theme of computer research which deals with a combination of real world and computer generated data. AR is just one version of a Mixed Reality (MR) technology, where digital and real elements are mixed to create meaning. In essence AR is any live image that has an overlay of information that augments the meaning of these images.

Digital graphics are commonly put to work in the entertainment industry, and ‘mixing realities’ is a common motif for many of today’s media forms. There are varying degrees to which The Real and The Virtual can be combined. This is illustrated in my Mixed Reality Scale:

This is a simplified version of Milgram and Kishino’s (1994) Virtuality Continuum; simplified, because their research is purely scientific, without an explicit interest in media theory or effects, therefore not wholly applicable to my analysis. At the far left of my Mixed Reality Scale lies The Real, or physical, every-day experiential reality. For the longest time we lived solely in this realm. Then, technological innovation gave rise to the cinema, and then television. These media are located one step removed from The Real, a step closer to The Virtual, and can be considered a window on another world. This world is visually similar to our own, a fact exploited by its author to narrate believable, somewhat immersive stories. If willing, the viewer is somewhat ‘removed’ from their grounding here in physical reality, allowing them to participate in the construction of a sculpted, yet static existence. The viewer can only observe this contained reality, and cannot interact with it, a function of the viewing apparatus.

Later advancements in screen media technologies allowed the superimposition of graphical information over moving images. These were the beginnings of AR, whereby most of what is seen is real with some digital elements supplementing the image. Indeed, this simple form of AR is still in wide use today, notably in cases where extra information is required to make sense of a subject. In the case of certain televised sports, for example, a clock and a scoreboard overlay a live football match, which provides additional information that is useful to the viewer. Television viewers are already accustomed to using information that is displayed in this way:

More recently, computing and graphical power gave designers the tools to build wholly virtual environments. The Virtual is a graphical representation of raw data, and the furthest removed from physical reality on my Mixed Reality Scale. Here lies the domain of Virtual Reality (VR), a technology that uses no real elements except for the user’s human senses. The user is submersed in a seemingly separate reality, where visual, acoustic and sometimes haptic feedback serve to transpose them into this artificial, yet highly immersive space. Notice the shift from viewer to user: this is a function of the interactivity offered by digital space. VR was the forerunner to current AR research, and remains an active realm of academic study.

Computer graphics also enhanced the possibilities offered by television and cinema, forging a new point on the Mixed Reality Scale. I refer to the Augmented Virtuality (AV) approach, which uses mainly digital graphics with some real elements superimposed. For example, a newsreader reporting from a virtual studio environment is one common application. I position AV one step closer towards The Virtual to reflect the ratio of real to virtual elements:

There is an expansive realm between AV and VR technologies, media which offer the user wholly virtual constructions that hold potential for immersion and interactivity. I refer to the media of video games and desktop computers. Here the user manipulates visually depicted information for a purpose. These media are diametrically opposed to their counterpart on my scale, the cinema and television, because they are windows this time into a virtual world, actively encouraging (rather than denying) user interactivity to perform their function. Though operating in virtuality, the user remains grounded in The Real due to apparatus constraints.

Now, further technological advancements allow the fusion of real and virtual elements in ways not previously possible. Having traversed our way from The Real to The Virtual, we have now begun to make our way back. We are making a return to Augmented Reality, taking with us the knowledge to manipulate wholly virtual 3D objects and the computing power to integrate digital information into live, real world imagery. AR is deservedly close to The Real on my scale, because it requires physicality to function. This exciting new medium has the potential to change the way we perceive our world, forging a closer integration between our two binary worlds. It is this potential as an exciting and entirely new medium that has driven me to carry out the following work.

To begin, I address the science behind AR and its current applications. Next, I exploit an industry connection to inform a discussion of AR’s development as an entertainment medium. Then, I construct a methodology for analysis from previous academic thought on emergent technologies, whilst addressing the problems of doing so. I use this methodology to locate AR in its wider technologic, academic, social and economic context. This discussion opens ground for a deeper analysis of AR’s potential socio-cultural impact, which makes use of theories of media and communication and spatial enquiry. I conclude with a final critique that holds implications for the further analysis of Mixed Reality technology.

This series addresses the development and emergence of a new media technology known as Augmented Reality.
I hold the view that this is a culturally significant innovation that holds implications for the user in society.

My discussion reaches a depth of analysis not yet met by contemporary media theorists, but I employ previous academic thought on emergent technologies to provide a framework for analysis, whose work also guides and highlights certain key points that I make.

I address this work with a methodical, structural approach that leaves room for exploration of themes such as virtuality, experiential reality, economics, art, the aura, space, technological determinism, and hyper-reality.

As you’ll see from my Last.fm profile, I’ve been listening to a lot of Daft Punk lately. For those who haven’t heard their stuff, this track in particular is the one I think best sums them up:

Technologic (The State Remix) by statemusic 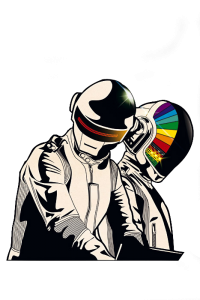 Sound familiar? Thought so – it’s the soundtrack to our modern lives.
And it begs the question: are we slaves to our media or is the media subject to us?

Digital Media (as referred to in the above) is the most pliable of all forms, possibly all materials. But do we lose anything by acting as their conduit? Do we define their being by the act of using them?

By way of answer, Marshall McLuhan states that:

Physiologically, man in the normal use of technology […] is perpetually modified by it and in turn finds ever new ways of modifying his technology. Man becomes, as it were, the sex organs of the machine world, as the bee to the plant world, enabling it to fecundate and to evolve ever new forms.

Punchy stuff indeed, and his point rings truer now than in 1967 when it was first written (for more McLuhanism check out The MemeStream, an older academic blog of mine). The relationship between Man and Machine is blurred in Daft Punk’s own appearance – they are never seen in public without their robot masks.

As I see it, Daft Punk have tapped into the zeitgeist of a world growing ever-reliant on our technologies, without much thought of how these forms may be exploiting us. It’s a beat-heavy warning to the masses to stay human, and not to be  anyone’s “sex organ”.

So what do we think? Are these French electro-popsters oracles for a future world? Answers on a postcard please, or in the comments box below.